Review: The Unstrung Harp, Or, Mr. Earbass Writes a Novel 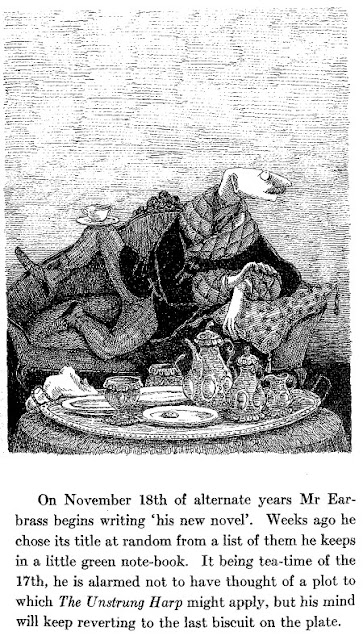 Edward Gorey is one of those authors who grows on you–a bit like the moss that accumulates on the shingles of a neglected Victorian Gothic mansion whose owners have fallen on hard times.  His macabre cartoons with their laconic captions provide the reader with a tour of a disturbing, gloomy, decadent world where it is always genteel, the 1920s, and perpetually overcast.  It's therefore fitting that I'm writing this review on a cold February morning when rolling winter storms keep dumping layers of snow, which then collapse in a few hours into mounds of grey slush.  One must be in the proper mood when approaching certain projects.

The Unstrung Harp, Or, Mr. Earbass Writes a Novel is a slim little volume that in words and pictures recounts the efforts of novelist C(lavius) F(rederick) Earbass to come to grips with his latest novel called, for no real reason, The Unstrung Harp.   A Creature of habit, Mr Earbass always starts his new novels on the 18th of November of alternative years, but on 17 November discovers that he hasn't the slightest idea for a plot.  Clad in his favourite sweater, he tries to get stuck into his work, but he soon finds himself wandering about the house or into town in search of inspiration that keeps eluding him.  He's forever waking at night wracked by doubts about the book and it doesn't help that he meets some of his characters wandering about on the landings.  Through rewrites, revisions, and up to publication, Mr Earbass is torn between his desires to change every word he's written or just tossing the manuscript in the Thames.

It's a strange tale where jam sandwiches have a bizarre significance, secondhand book stalls pose unfathomable mysteries, and where the creative process is fraught with it's "attendant woes: isolation, writer's block, professional jealousy,  and plain boredom".  It's also very funny–not in the laugh out loud sense, but in the quietly amused manner.  It's a book to read on a silent winter's night with a glass of dry sherry.  It's also recommended for any author dealing with the frustrations of writing because it shows that struggling over chapter II or leaving doors open and empty tea cups on the floor is all part of the job.

Though, perhaps, not stuffed fantods under bell jars.
Posted by David at 00:00