"Black Destroyer" (Astounding Science Fiction, July 1939.  Later incorporated into Voyage of the Space Beagle (1950))  was A E Van Vogt's first short story and its making the cover of Astounding says a great deal about the impact that it made.  The story is in many ways the dark version of Stanley G Weinbaum's  "A Martian Odyssey" (Wonder Stories, July 1934).  In both of these, the author set out to produce an alien character that is believable and that, in the end, turns out to be much more memorable than their human counterparts.  Both show aliens remarkable abilities and both turn out be members of a dying race that once commanded the heights of civilisation, but where Weinbaum's Tweel is a charming character who becomes friends with the human protagonist, Van Vogt's Coeurl is a heartless killer who lusts over nothing less than mass murder and galactic conquest.

Coeurl is the one of the last remnants of a race that inhabit a distant planet that is the sole satellite of a star thousands of light years from Earth.  At the height of their civilisation, the Coeurl (their race and individual names are the same), suffered a sociological disaster that made them question every aspect of their culture to the point where the cohesion of their society  broke down and the inhabitants were reduced to criminal barbarism where it was every Coeurl for himself.  Once the lords of their planet, the Coeurl are reduced to the status of predators hunting down the few remaining beasts possessing the "id" that they need to survive.

This particular Coeurl is on the edge of despair after realising that he's eaten the last id creature in his territory when a singular thing happens; a giant spaceship from Earth appears in the sky and lands just outside the ruins of the city that the nearly immortal Coeurl abandoned millenia ago.

Coeurl tries to pass himself off to the Earthmen as an animal worthy of study, but his insatiable hunger, criminal nature, and contempt for the primitive visitors exposes him to suspicion after he murders one of the crew.  Soon it is a battle of wits as Coeurl keeps the Earthmen guessing while the explorers try to determine the alien's guilt and the extent of its incredible powers. 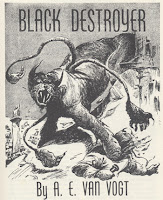 "Black Destroyer" is an interesting short story for its use of characterisation, but also because of its tremendous influence.  It was not only one of the stories that ushered in the Golden Age of science fiction, but its formula of a starship full of motivated, altruistic professionals set the template for everything from Forbidden Planet to Star Trek to Alien.  Ironically, this even extends to the way that though Coeurl is vividly written, the Earthmen are little more than vague descriptions tagged to sharp attitudes.

"Black Destroyer" pointed the way toward Van Vogt's uneven career that saw his creative mind struggling with his desire for some sort of neat scientific order to his life.  It was a struggle that would produce such sci fi classics as Slan as well as his many obsessions with becoming a self-made superman that would ultimately end up with him enthralled to the hucksterism of Dianetics.