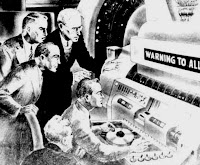 In the 21st century,computers are a fact of life.  Once exotic machines that few people saw and fewer understood, computers are not found everywhere.  Home,  office, supermarket, or coffee shop; no matter where you go, you're likely to find one.  Even if you travel half a world and try to hide in the rudest African hut, odds are that the local Masai hunter will have a cell phone tucked into his garments–a phone that includes a computer more powerful than any on Earth during the 1960s.

Today, computers are so common that they've gone from discrete machine to components in other devices.  But in 1956 when Isaac Asimov published "The Last Question", it was a very different world.  Then, there were only a handful of computers on the entire planet.  They were gigantic things that were so large that they were often incorporated into the very architecture of the buildings that contained them.  Unlike today when a four-year old can operate a computer so well that you have to make sure to keep ebay on the blocked sites list, the computers of the 1950s used only arcane machine languages that were as hard to decipher as the pronouncements of an oracle.  And they were so expensive that even the experts in computer science had very little hands-on experience in trying to figure out what they could really do or what their limitations were.

Its small wonder, therefore, that the 1950s saw the birth of Asimov's Multivac series.  The name "Multivac" was a play on the sort of exotic monikers that computers sported in those days.  Eniac, Univac, Multivac; its was a natural progression.  Multivac, according to Asimov in "The Last Question", was the ultimate in computers;  a 21st century computer covering many cubic miles and so complex that the men who built and maintained it have only


(A) vague notion of the general plan of relays and circuits that had long since grown past the point where any single human could possibly have a firm grasp of the whole.

As for the technicians,


Multivac was self-adjusting and self-correcting. It had to be, for nothing human could adjust and correct it quickly enough or even adequately enough. So (they) attended the monstrous giant only lightly and superficially, yet as well as any men could. They fed it data, adjusted questions to its needs and translated the answers that were issued. Certainly they, and all others like them, were fully entitled to share in the glory that was Multivac's.

In other words, Multivac is a secular version of God; made in man's image, powerful, beneficent, and (above all) tame.  In another writer, this paragraph would be called foreshadowing, but Asimov never indulged in anything so subtle.  This is merely tipping his hand.

Once he's set up Multivac for the reader, Asimov moves to the meat of the short story.  Multivac, apparently all on his lonesome, has perfected solar power and provided mankind with a limitless source of power.  Two technicians, getting drunk in celebration, argue about whether or not that means power "forever" with one technician arguing that because of entropy there can't be a "forever" because all the stars in the universe will eventually run down even if it takes tens of trillions of years.  This being the 1950s, I should have been surprised that Asimov doesn't bother to at least give the Steady State theory a look in, but why becomes obvious later.

"The Last Question" is very simple in structure.  It's a series of very simple vignettes where a couple characters hundreds, millions, or billions of years in the future retread the argument of the two technicians and, like the two, asks the same question,


How can the net amount of entropy of the universe be massively decreased?


THERE IS AS YET INSUFFICIENT DATA FOR A MEANINGFUL ANSWER.

Multivac always talks in All Caps.   As the same question is asked we see each new version of Multivac grow from giant building to taking up whole planets to residing somewhere in hyperspace.  Eventually, Multivac sounds so much like Deep Thought  I kept expecting a couple of irate philosophers to barge in. Meanwhile, mankind expands exponentially until it occupies every planet in every galaxy in the universe.  All very Malthusian, but then, population dynamics were never Asimov's strong suit.

The interesting thing about "The Last Question" is that it shows the nature of Asimov's interest in the human race.  He didn't have one.  Whether short story or novel, for Asimov humanity was just masses that acted as a backdrop for his ideas.  In this story, we get a potted history of man from now until doomsday, yet there is no sense of progress, setback, struggle, or ambition as a Wells or a Stapledon would have offered.  Nor is there any sense of common joys and sorrows that every person experiences.  The closest Asimov comes to this is with the introduction of a family emigrating to the stars–and the twin girls are nothing more than shrieking irritants.  In all, existence according to Asimov is pretty pointless.  He can't even care enough about humanity to offer up a sense of tragedy.  Instead, as the heat death of the universe looms, mankind merges with the AC (the ulitmate version of Multivac),


One by one Man fused with AC, each physical body losing its mental identity in a manner that was somehow not a loss but a gain.

Yes, we get the usual sci fi dream of those days of a future ending in the death of the individual and a life of pure thought.  At any rate, the last of Man asks the question again and then asks if there is a solution.  Regrettably, the computer doesn't start talking about building a new computer whose merest parameters it is not worthy to compute, but pronounces,


NO PROBLEM IS INSOLUBLE IN ALL CONCEIVABLE CIRCUMSTANCES.

For the ultimate computer, Multivac clearly has some fundamental gaps in its databanks.

One thing that Asimov is good at is grasping that a short story is essentially a "gag" and that everything boils down to the punchline.  In this case, Multivac is left the sole entity in the entire universe (Why it survives is glossed over unconvincingly) until it finds the solution at last and proclaims,


LET THERE BE LIGHT!

It's a nice ending, but Fredric Brown got there a lot quicker and with more impact.
Posted by David at 00:00