Review: Who Goes There? 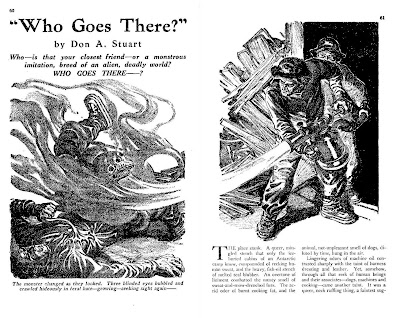 In the 1930s, the Second Magnetic Expedition to Antarctica finds more than it bargains for.  Investigating a magnetic anomaly some 80 miles from base at the South Magnetic Pole,  the scientists discover the wreck of a spacecraft that crashed and was embedded in the ice over 20 million years ago.  Trying to remove the craft from the ice, the thermite charges they use accidentally destroy it, but they manage to recover the frozen body of one of the occupants, who was thrown clear.  Returning to base, they debate whether or not to thaw out their find for study, but there's resistance–partly due to fear of alien germs, but mainly because the three-eyed horror in the ice looks like a refugee from the Pit.  But thaw it they do, only to discover that even after 20 million years the thing is alive and it is a man-eating shape shifter with the power to perfectly mimic the form and behaviour of any living thing it devours.  The 37 men of the expedition are faced with the nightmare of not knowing who is human and who is an invader bent on taking over the world in the most complete manner possible–not by ruling it, but by replacing all life with itself.

"Who Goes There?" is remembered today mostly for being the basis for the 1951 film The Thing From Another World and the 1982 remake The Thing–which is a pity because Campbell's novella stands perfectly well on its own feet.  It can even be argued that as a horror story it still does a better job than either of its cinematic incarnations. Campbell introduces a truly original mystery:  How do you uncover a monster in your midst who can copy a man right down to his cells and his very thoughts?  What sort of a test can you devise?  And how do you do it before the thing manages to devour and replace everyone else?  On it's own, this would be a wonderful little detective story that keeps the reader second guessing how our heroes will solve their problem, but Campbell ups the stakes a notch.

Taking obvious inspiration from H P Lovecraft's At the Mountains of Madness, he lifts a simple bit of science fiction and turns it into a truly unsettling horror tale.  Early in the story, the scientists seemingly destroy the original thing when they find it trying to absorb one of their sled dogs, but their relief is very short lived when they realise that they've no reason to assume that the man they left to guard the thawing thing is still human.  Worse, they have no reason to assume that any of them are, so a large part of the plot is taken up by the expedition members living under increasing fear and anxiety as they hunt for a solution.  Isolating themselves from the outside world by destroying their aeroplane and tractors, the men live an existence of constantly watching one another while every man worries whether or not he might be the only human left.  Campbell never allows the pressure to let up as tests become blind alleys and it becomes clear that time is running out.

It's not a perfect story.  Though the characters are very well delineated for a pulp story, it's obvious from the first page who Our Hero is  and it's highly improbable that he'll turn into alien chowder.  On the other hand, we do feel for the deaths of other characters.  Campbell also gets points for doing his homework on Antarctic exploration and he provides a real feel for the sights, sounds, and smells of men living in such a confined world.  Finally, he provides a nice little kicker at the end that reminds us that this is, in fact sci fi and not a horror outing.

In all, a satisfying read, but I'd recommend that you do so on a summer afternoon and not on a blizzardy winter's evening.
Posted by David at 00:00