Review: The Adventure of the Blue Carbuncle 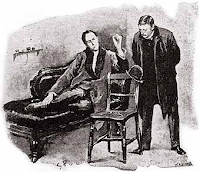 In some households, Christmas is marked by reading Dickens's "A Christmas Carol".  Others with "The Gift of the Magi" and some by opening up a traditional ghost story.  At Chez Szondy, we celebrate the Yuletide with "The Adventure of the Blue Carbuncle".

I feel that this is appropriate, not only a proper Christmas story, but the season also looms large in Sherlock Holmes lore.  It was in the Beeton's Christmas Annual of 1887 that A Study in Scarlet was published and it was in the Christmas issue of The Strand in 1893 that Watson's editor, Sir Arthur Conan Doyle, tried to kill off Holmes at the Reichenbach Falls.  In "The Adventure of the Blue Carbuncle", Christmas has Holmes and Watson by the throat.  Watson visits Holmes at their old digs at 221B Baker Street to pay the detective the compliments of the season only to find Holmes intently studying a battered old hat.  This had been lost by a man  who'd been set upon by roughs in Tottenham Court Road along with a fine Christmas goose.  The commissionaire who witnessed the scuffle and the fleeing of both the roughs and the man found himself in the possession of hat and goose and took them to Holmes because he knew that the detective found even the smallest problems of interest.  In the interest of waste not, want not, Holmes told the commissionaire to keep the goose for his family's Christmas dinner while Holmes retained the hat.

Naturally, Holmes is able to deduce all manner of things about the headgear, but what he couldn't deduce was that the commissionaire would find a fabulous jewel in the crop of the goose–a jewel that had been a sensation since its disappearance earlier in the week.  The question is, how did it come to be inside the bird and what did the owner of the hat have to do with it?  What follows is a tale of Holmes and Watson descending into the would of London poulterers as they retrace the goose's career.

"The Adventure of the Blue Carbuncle" is one of the best written, certainly one of the most charming of the Sherlock Holmes stories.  Never mind that many over the years have delighted in picking apart Holmes's hat deductions.  They were never meant to stand up to serious examination in the fist place, since they were merely a literary device to convince the reader of his analytical powers,  They serve their purpose and serve it well and Holmes uncovering the secret of Mr Henry Baker's life from the stains and dust on his hat are a classic of the mystery genre.

Beyond that, we have what truly makes the Holmes stories unique.  In this adventure, we have on display Conan Doyle's spare, economical writing style that has held up so well after over one and a quarter centuries.  He brings Victorian London to life so well that the modern capital can't compete with it for all its wifi hot spots and bicycle lanes and glass gherkins.  It is a live, vivid city that we feel that we are truly visiting.

And, of course, there is the friendship between Holmes and Watson that is the foundation of the stories and what keeps drawing us back.  See the two in a Christmas settings is a cozy, reassuring episode that ends with a neat little dispensation of justice, Yule spirit and another mystery with a bird as the centrepiece.

Happy Christmas from The Quill & The Keyboard.
Posted by David at 00:00