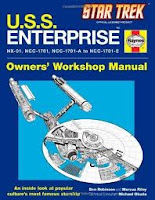 Science fiction fans are a bit like Horatio Hornblower fans; the fiction is no fun unless you can wallow in the technical details as well.  Back in the 1970s, the first attempt to give fans a behind the scene look at "treknology" was the Star Trek: Star Fleet Technical Manual, which purported to give the reader all the background on warp drive, how phasers worked, and even sewing patterns for "official" uniforms.  It was a paperback in a plastic slip cover and had a crude, mechanical draughting feel to it, but that helped to give it an air of authenticity.  Since then, we've had Star Trek blueprints, medical manuals, and heaven knows what else.

The latest variation on this gag is the Star Trek: U.S.S. Enterprise Haynes Manual.  It tries to be an update on the earlier version and strives to give a bigger boost through more sophisticated graphics, but in the end it is a perfect example of how less is more.  The cutaway diagrams are fun and some bits of trivia such as how the navigation console of the original series evolved is interesting for those with an eye for set design, but the attempt to cover all the series and films while including expositions of fanciful pseudoscience and potted non-history is ultimately tedious.  Forty years ago, such a book would have been a nerd's dream by allowing him to relive old television adventures in his head, but since the invention of video, these sort of books are only for the diehard trekkie.
Posted by David at 00:00