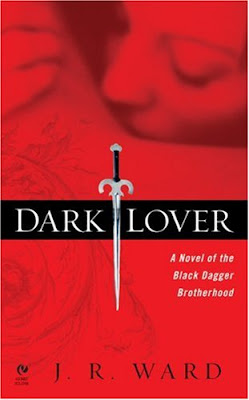 My choice of what fiction I read revolves around a number of reasons.  Sometimes I read a book because I'm doing research for my site Tales of Future Past.  Sometimes it's because the work is topical.  And (rarely) I might even read one for pleasure.  Then there are the times when I read something because the wife asks me to.  She does this because she knows that my opinions of books are completely honest and she's willing to put up with my tendency to disembowel a work if I feel it deserves it.

Such is the reason why I read Dark Lover.

You can't judge a book by its cover, but you can judge it by the author's photo.  If the writer is awkwardly posed, looking distinctly embarrassed or uncomfortable, is slightly blurry because he refused to sit still, or has the air of someone who is dead tired because the photographer needed twelve hours to get a decent head shot, then I conclude that this is a book worth at least skimming.  On the other hand, if the author is enjoying herself,  strikes a self-conscious pose or, worse, affects some sort of costume, then I know that I'm in for dreck.   If said photo is appended to a doorstop novel that is the first in a twelve volume series, then I know that it will be a pile of steaming, freshly regurgitated dreck with a side order of tedium.

Such is Dark Lover.  I haven't any liking for the subgenre known as "paranormal romance".  Frankly, I regard the entire field as twee and more than a little embarrassing even in the abstract.  Sort of like Mills & Boon with fangs.  But then, fangs ain't what they used to be.  I prefer my vampires out of Bram Stoker, not Barbara Cartland.  However, I was willing to set aside my dislike for the genre and judge Dark Lover as I would a bit of general fantasy fiction.  Then I read the pile of... but I don't use that sort of language in a review.  Let's give the paperback edition's blurb writer the honour of providing the synopsis:


In the shadows of the night in Caldwell, New York, there's a deadly turf war going on between vampires and their slayers. There exists a secret band of brothers like no other—six vampire warriors, defenders of their race. Yet none of them relishes killing their enemies, the lessers, more than Wrath, the leader of the Black Dagger Brotherhood....


The only purebred vampire left on the planet, Wrath has a score to settle with the slayers who murdered his parents centuries ago. But, when one of his most trusted fighters is killed—orphaning a half-breed daughter unaware of her heritage or her fate—Wrath must usher the beautiful female into the world of the undead....


Racked by a restlessness in her body that wasn't there before, Beth Randall is helpless against the dangerously sexy man who comes to her at night with shadows in his eyes. His tales of brotherhood and blood frighten her. But his touch ignites a dawning hunger that threatens to consume them both....

Four full stops in the ellipsis. Oh, dear.  As a piece of sales copy, it's not bad.  Not when you consider that it shields the potential reader from the awfulness of the novel like a yard of lead.  This is the sort of book that has lines like:


Her core bloomed for him.

I laughed so hard when I read it that I had to wipe the tears off my glasses.  This is truly bad.  Dark Lover isn't so much a novel as a roll call of clichés.  Beautiful heroine whom everyone falls over like the lead character in Mary Sue fanfiction?  Check.  Lecherous boss so broadly stereotyped that he reads as if written in with crayon? Check.  Tough-as-nails homicide detective who shows the perps how they do things downtown? Check.  Hero with volcanic passions and a turbulent past only because the author says so?  Check.  Frat boy rapist straight out of that Duke University travesty?  Check.  Hero that makes Fabio in his prime look like Don Knotts?  Check.  Ludicrous underground vampire society?  Check.  Vampires who aren't really vampires?  Check.  Secret war between shadow armies?  Check.  Really, really bad sex scenes.  Oh, boy, Check.  Voldemort knock-off villain?  Check. Plot so predictable that you can write the blurb before even turning the book over? Check and double check.  There's even a character called "Mr X" for pity's sake!  Check!

And it gets worse.  Vampire Warriors.  "Vampire" is already a red flag in modern fiction.  Any work that uses the word "warrior" when not referring to real soldiers is as bad.  The two in tandem is critical mass of badness.  Ward compounds this by giving her "warriors" names like Rhage, Dhestroyer, Vishous, Phury, Rehvenge and Tohrment.  Apparently the vampire educational system leaves much to be desired when it comes to spelling.   They are all completely interchangeable versions of Ward's ideal lover–which is apparently a giant, greasy biker in leathers who spouts street slang.  The biker, not the leathers.

Writing this amateurish usually doesn't make it to the book stalls without an armed escort. Ward's style is painfully cinematic to the point where she comes across as a bodice-ripping J K Rowling.  This is not a good thing.  She also seems to be writing for a market with the IQ of a pair of dice, since she feels obligated to provide a glossary for people who can't remember what the word "vampire" means.  We're lucky she doesn't mark each page with an arrow marked "this end up".  Then there's her inability to grasp the concept of showing instead of telling.  Her idea of characterisation is to tell you what this or that person is like. Tell as in flat exposition. Show an event unfold?  Nope.  Just give us a synopsis after the fact.  And never, ever, let a character do something for themselves.  Repeat as necessary. It's like bad opera without the music.

Dark Lover is a book that I can honestly say that I couldn't put down.  I didn't dare to because if I did, I'd start pounding it with a mallet; unable to stop until I was sobbing and retching.
Posted by David at 00:00