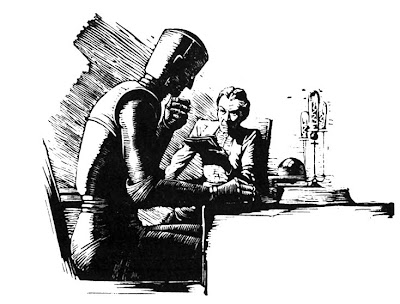 Second Law:
A robot must obey orders given it by human beings, except where such orders would conflict with the First Law.

Third Law:
A robot must protect its own existence as long as such protection does not conflict with the First or Second Law.

Careless talk costs lives.  It also lead to some knotty problems when there's a literal-minded robot within earshot.  At Hyper Base, a secret government space station dedicated to developing faster than light travel, an aggravated scientist loses his patience with a robot and tells it to get lost–and it promptly does so by hiding among an arriving shipment of identical robots. This would be merely annoying, except that this robot is a special job with a modified version of the First Law:  It can't harm a human being, but it can allow a human being to come to harm.  This makes it an extremely dangerous piece of machinery that must be located or the alternative is destroying over five dozen extremely valuable robots.  So, the Solar System's leading robopsychologist, Dr Susan Calvin is brought in to try to find some way of finding the little lost robot who does not wish to be found.

Isaac Asimov's robot stories had a great impact on the development of science fiction by introducing the idea that robots, like all other machines, would be built with safeguards.  They also went a long way toward making robots sympathetic characters and it was through stories like "Little Lost Robot" that the line runs to Robby the Robot, C3PO, and R2D2.  That being said, this story, like the rest of Asimov's robot series, aren't so much stories as logic problems disguised as fiction.  Indeed, they often read like padded out Minute Mysteries and I'm often expecting to be directed to turn the page upside down to read the answer.  Structurally, they are also like rather pedestrian whodunnits with the crime, the dilemma, the detective, the red herrings, and the solution tied up in a neat bow at the end.  That's all very well if one is approaching such a story like working a crossword puzzle (which many mysteries freely admit to being akin to), but as a work of drama, the robot series are singularly unsatisfying.

One problem, as with all of Asimov's writing, is his utter inability to master description.  Reading an Asimov story, it is impossible to hold any sort of picture in one's mind as to where the story is taking place, or what anything is.  These are stories about robots, for example, yet it is impossible from reading Asimov to come away with any sense of what sort of machines they are except that they are metallic.  Are they roughly humanoid machines? Do they look like suits of armour?  Metal mannequins?    Are they clumsy?  Graceful?  Awe-inspiring?  Crude?  What?  I don't expect a detailed catalogue, but at least throw in the odd simile.  We aren't even told what the robots on Hyper Base are for.  What work do they do?  Why are they indispensable?  There are human labourers there, so why the robots?  Is it just to provide grist for a mystery story?

The same goes for characters.  Asimov was very fond of his creation Susan Calvin, but she is little more than a sustained waspish attitude latched to a Miss Marple knock off.  The other characters in the story are wildly inconsistent, vacillating between belligerence and  deference in a heartbeat.  Motivations are never very strong, conflict comes across as something that Asimov would rather not deal with if he has a choice, and, as usual, the author hangs much of the story on contrived psychological "facts" that have no basis in the real world.  Worse, the dilemma can only be sustained by praying that the reader keeps overlooking one question:  Why aren't the robots isolated from one another so that the one being sought can't cheat against the tests to find it?

"Little Lost Robot" isn't a bad story.  In fact, it could be salvaged very easily if it was placed in the hands of another writer who actually has some affinity with human beings rather than sci fi concepts.  This isn't even conjecture.  In the 1960s, the television series Out of This World adapted the story for the talking fish tank.  Read the original and compare it to the television version and one sees the difference.  In the later, Dr Calvin comes across as a three dimensional character with motivation and courage who actually likes talking to other people and can even be charming.  The base commander grows roses, the lost robot is cunning and even a bit sinister, and the engineer Black, who in the story is a passing moment of beefy bluster, is the real villain of the piece and a source of solid conflict. Finally, the ending in the print version is basically "Well, we've caught the robot. Bye".  But on the screen it ends on a disturbing note as the lost robot murders Black and it's pointed out to us that the other robots, which are being shipped to the four corners of the system, have witnessed it and know that such a thing is possible.  What will they make of that precedent?